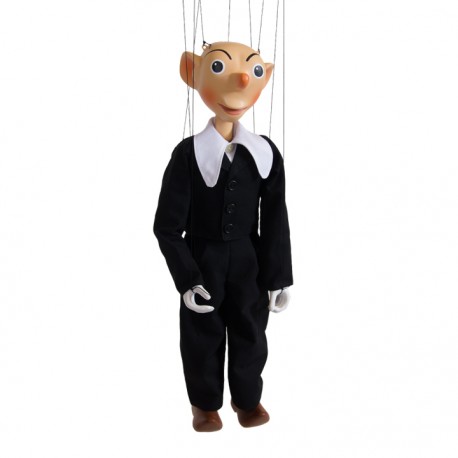 The oldest figure in the Spejbl and Hurvínek Theater. The puppet is produced under license, 47 cm high. Both limbs and head are made of impact resistant resin.

Notify me when available

Spejbl is a strange eared bullet with bulging eyes. Skupa made him a caricature of a bewitched townsperson, so Spejbl is bald, as an annoyed, outspoken grandfather, wears an old-fashioned tailcoat to add seriousness, but he contrasts sharply with the clogs Spejbl has on his feet.

Its form is also somewhat influenced by Dadaism. Spejbl is a comic character, talking (in Skupa‘s submission) with a chubby voice and confusing everything. In dialogues with Hurvinek, there is a generational dispute in which Spejbl is an oven-maker who wants to instruct everyone, while Hurvinek presents a whimpered, snuggling son who, with his inquisitive questions, gets his father into a tight one.

In Kirschner‘s interpretations, the role of the father becomes a priority, and Spejbl acts more like a comically erratic character. After Kirschner‘s death, the main focus is moved to Hurvínek and Mánička, and Spejbl becomes a side character, a silly father with a superficial interest in Hurvínek, returning to the original scheme of Josef Skupa.

However, from the very beginning the characters of the two characters varied considerably according to the needs of the individual games; they were never strong characters.

10 other products in the same category: